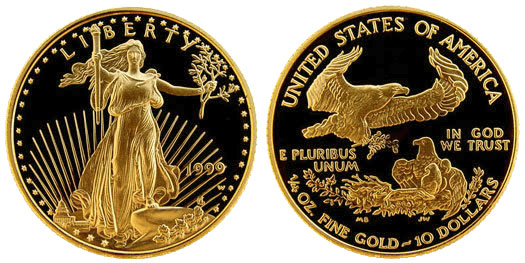 An all time high for US Mint gold bullion coin production was reached with the 1999 Gold Eagle (Buy on eBay). To this day, the record number of gold bullion coins produced during 1999 has not been surpassed. Particularly in demand were the 1 oz and 1/10 oz denominations suggesting investment demand from both ends of the spectrum. The surge in demand was attributed to the growing uncertainty surround the approach of Y2K.

The collectible proof Gold Eagles also experienced an uptick in demand ahead of the new millennium. The 1999 Proof Gold Eagle (Buy on eBay) saw higher mintages, particularly in the small size 1/10 oz coin, which was available for sale individually. The US Mint also sold the 1 oz, 1/2 oz, and 1/4 oz sizes individually, plus a complete 4 Coin Set.

A notable error or variety coin exists for this year known as the 1999-W Gold Eagle Struck with Unfinished Proof Dies. A number of $5 and $10 Gold Eagle bullion coins were struck with the “W” mint mark. Since bullion coins are not supposed to include a mint mark, it is believed that a die intended for striking proof coins was used for production of bullion coins. The mistake was not recognized by collectors until the following year and only a relatively small number of the oddities have been identified.

The growing demand and uncertainty about the future did result in a spike in the price of gold during the year. After starting at $287 per ounce, the price slowly sank to about $255. The price remained around this level for several months before quickly spiking to $325 at the end of September. Gold eventually closed out the year at $290 per ounce, only a few dollars from where it started.